The European Hospital and Healthcare Employers’ Association (HOSPEEM) and the European Public Services Union (EPSU) today signed an EU-wide agreement to prevent injuries from needlesticks and other sharp objects.

The Joint Framework Agreement was concluded after five months of negotiations by the European social partner organisations in the sector, which employs around 3.5 million people.

Background
In 2006, the European Parliament adopted a resolution requesting the Commission to submit a legislative proposal on protecting healthcare workers from blood-borne infections due to needle stick injuries.
After the two-stage consultations on this issue, in 2006 and 2007, the EU social partners decided to organise a technical seminar with all stakeholders (nurses, doctors, surgeons and so on), which highlighted the many causes of injuries in hospitals and healthcare services.
In December 2008, they informed the Commission of their intention to negotiate on a wider basis covering all types of sharp injuries (including needle sticks). The negotiations, to which the commission provided technical and logistical support, started in January 2009 and were completed on 2 June 2009.

The agreement aims to:

– achieve the safest possible working environment for employees in the sector and protect workers at risk;
– prevent injuries to workers caused by all types of sharp medical objects (including needle sticks);
– set up an integrated approach to assessing and preventing risks as well as to training and informing workers.

At the request of the European social partners and after having examined their representativeness and the legal conformity of the text, the Commission intends to submit, after the summer, a proposal to the Council for implementation of the agreement by a directive, in accordance with article 139 of the Treaty. The agreement specifically addresses one of the priority objectives of the EU’s current strategy for health and safety at work (2007-2012). 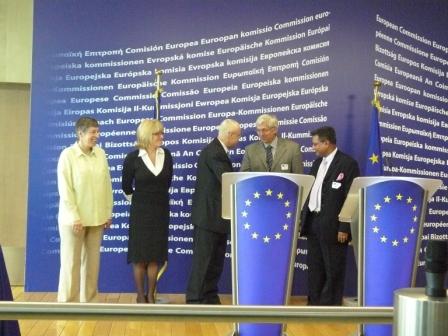