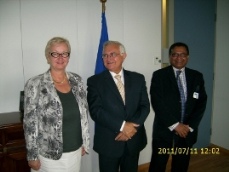 Both HOSPEEM and EPSU underlined their keen interest of becoming involved in planning, implementation and follow-up to the Joint Action on EU Health Workforce Planning, as a first common priority. In this context, the social partner representatives referred to the Framework of Action “Recruitment and Retention”, signed on 17 December 2010, constituting the key reference document to develop concrete action to tackle staff shortages and qualification needs now and in the future. In the meeting with Commissioner Dalli, EPSU and HOSPEEM also presented the Code of Conduct on Ethical Cross-Border Recruitment and Retention in the Hospital Sector, adopted on 7 April 2008, and explored how this social-partner-based document could be better promoted at European level, in parallel to the complementary WHO Global Code of Practice on the International Recruitment of Health Personnel, adopted in May 2010.

“We need a balanced approach to mobility of health care staff” said Godfrey Perera, HOSPEEM Secretary General. “We cannot sustain a situation where the more affluent countries in the EU benefit to the detriment of the exporting countries, such as Latvia or Romania.” Carola Fischbach-Pyttel, General Secretary of EPSU, concurred in saying: ”Investing in health care is investing in the future of a country. The health status of a nation determines its economic performance. Health care staff are extremely motivated to do a good job. This motivation should be built upon to enhance the employment of both younger and older staff now and in the future.“

Commissioner Dalli concluded the meeting by stating that he looked forward to working closely with the Social Partners in the future.

The Sectoral Social Dialogue Committee for the Hospital Sector was set up in 2006. EPSU and HOSPEEM have agreed on a number of joint texts and are involved in projects to promote a properly functioning social dialogue across Europe. The most prominent example of successful negotiations is the Framework Agreement on the prevention of sharps’ injuries in the hospital and healthcare sector concluded by HOSPEEM and EPSU on 17 July 2009, later incorporated in Directive 2010/32/EU of 11 May 2010, currently transposed into national legislation. For EPSU and HOSPEEM European integration is very much linked to universal access to health care for all, based on solidarity and equity.

HOSPEEM is the European Hospital and Healthcare Employers Association. It regroups at European level national , regional and local employers’ associations operating in the hospital and health care sector and delivering services of general interest, in order to co-ordinate their views and actions with regard to a sector and a market in constant evolution. HOSPEEM is an individual member of CEEP.

EPSU is the European Federation of Public Service Unions. It is the largest federation of the ETUC with 8 million public service workers from over 200 trade unions are members. They organise workers in the energy, water and waste sectors, health and social services and local and national administration

In the Sectoral Social Dialogue Committee for the Hospital Sector on both 18 December 2010 (Plenary Meeting) and 31 January 2011 (Working Group) EPSU and HOSPEEM reaffirmed their commitment to continue their work and partnership approach as developed in the context of their first two joint work programmes 2006-2007 and 2008-2010.

The main general tasks for HOSPEEM and EPSU will remain in the coming three years to strengthen the social dialogue in the hospital sector at European, national, regional and local level and to take up our responsibilities as the recognised social partner European organisations for employers and workers in the hospital sector.

The third joint work programme covers the period from 2011 to 2013. There is ample evidence from the second period 2008-2010 that a three years work programme is instrumental for the Sectoral Social Dialogue Committee to discuss, plan, implement, complete and follow up on agreed priorities. Halfway through this period, in autumn 2012, the Committee will take stock of the work accomplished by then and assess its outcomes in order to – where appropriate – adapt planned activities and/or update priorities. The EPSU-HOSPEEM Work Programme 2011-2013 sketches out planned activities and projects under the European Sectoral Social Dialogue in the Hospital Sector.