The Dissemination Workshop of the HOSPEEM–EPSU joint project “Strengthening Social Dialogue in the Hospital Sector in the East, South and Central Europe”, took place on 16 June 2021 online.  The workshop was organised by HOSPEEM. #EUSocDia

Presentation and objectives of the project, Adam Rogalewski (EPSU)

Next steps and dissemination of project results (HOSPEEM)

***This workshop was originally planned in Brussels in 2020. Due to exceptional circumstances, the workshop takes place online on 16 June 2021***

EPSU has also published a webpage on this topic. 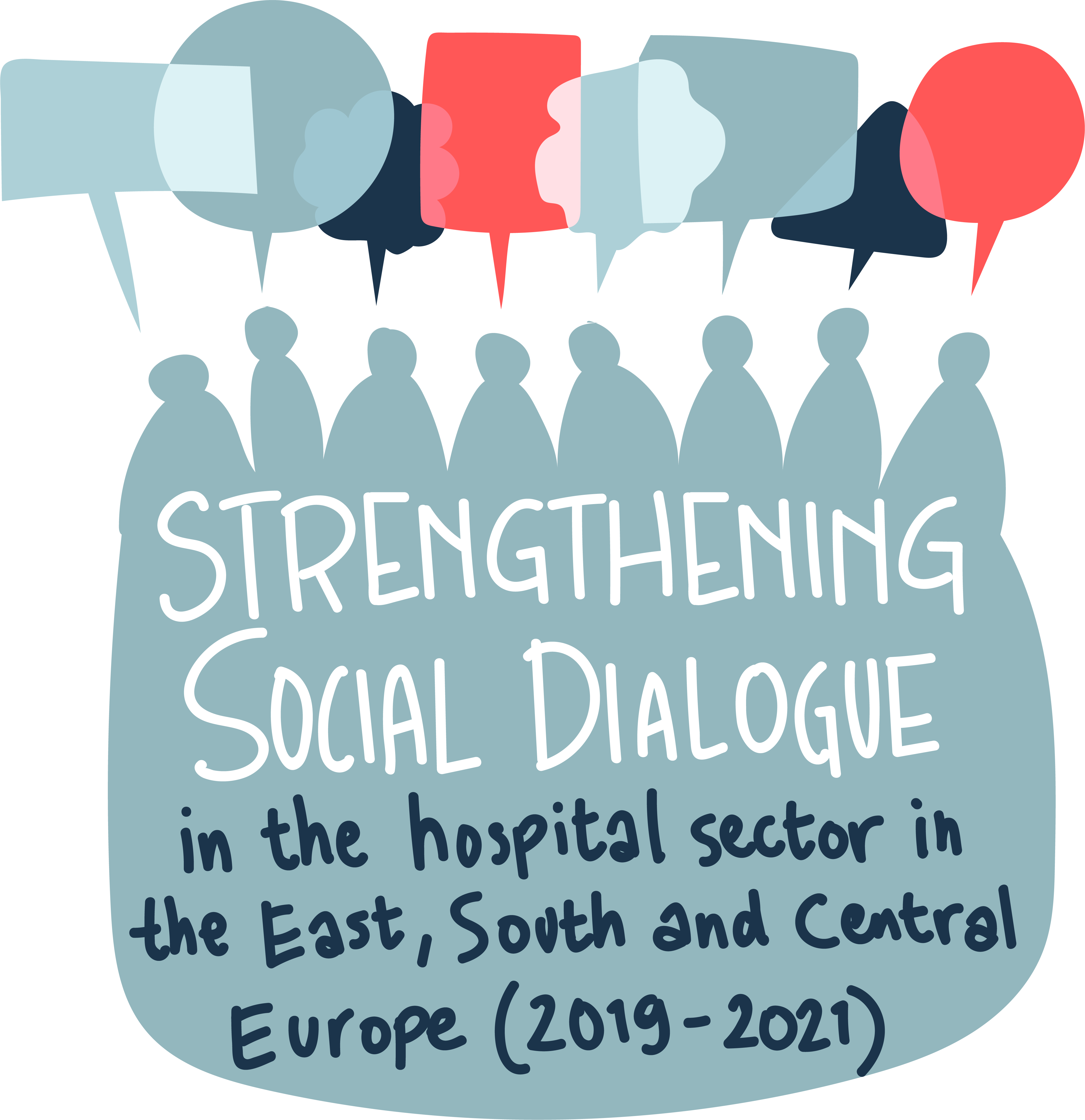 The third Regional Workshop of the HOSPEEM–EPSU joint project “Strengthening Social Dialogue in the Hospital Sector in the East, South and Central Europe” took place online on 20 April 2021. The workshop was organised by HSSMS-MT (EPSU affiliate, Croatia) and co-organised by EPSU.

The geographical focus of this third workshop is on Central Europe, specifically targeted at Croatia, Czech Republic, Slovakia, Slovenia. Simultaneous interpretation was provided from and into English, Croatian, Czech and Slovenian.

***This workshop was originally planned in Zagreb on 15 May 2020. Due to exceptional circumstances, the workshop took place online on 20 April 2021***

EPSU has also published a webpage on this topic. 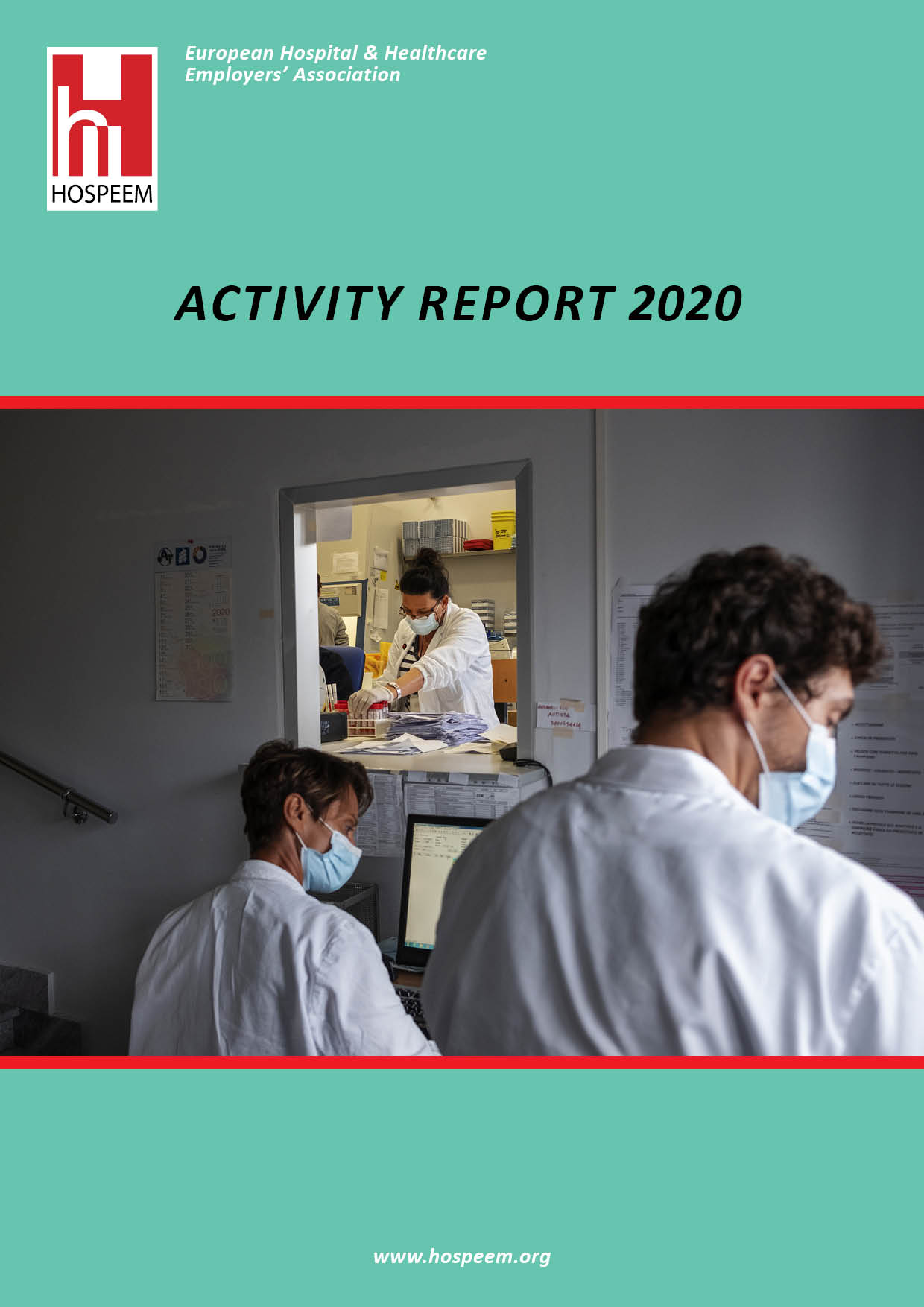 The year 2020 at a glance : HOSPEEM Activity report

2020 has been an eventful year ensuring that the views of hospital and healthcare employers are being heard at the highest level. The HOSPEEM Activity Report 2020 is published and presents the main activities carried out during the year (page 3,4,5) as well as relevant information on the structure and membership of HOSPEEM.

Firstly, HOSPEEM published a collection of challenges and lessons learnt in light of the COVID-19 outbreak, providing a first insight into hospital and healthcare employers’ experiences. HOSPEEM believes that long-term investments are of vital importance to sustaining a resilient healthcare system and society as a whole.

Secondly, the Eurofound representativeness study for the Hospital Sector was published, confirming that HOSPEEM remains the most representative hospital employer association on the EU level. HOSPEEM called for political support from European institutions to strengthen capacity building of sectoral social partners to be represented in the European sectoral social dialogue.

Thirdly, HOSPEEM and the signatories of the Multi-sectoral guidelines to tackle third-party violence (TPV) and harassment related to work published a statement on the occasion of the 10th anniversary of the guidelines in 2020.

To fully profit from the European Health Union’s undertaking and take care of those who take care of us, we have to generate dialogue between all stakeholders’ levels. Therefore, we highly appreciate the representation of social partners and civil society organisations, professional representation, and representatives from the Committee of the Regions.

Additionally, as representatives of national employers’ organisations, we are looking forward to providing and exchanging our expertise and practices to harness the European project’s full potential.

Looking at the European Commission proposal, we are confident that the EHU will help in four areas, by:

In the future, HOSPEEM is interested in receiving more information on the conducting the so-called “stress test” and the auditing process, including which indicators would be used.

While the health system’s stress test outcome might reveal significant shortages, the actors present with me at this panel have known them for decades. Hopefully, it will be a wake-up call for the Member States to acknowledge the sector as an investment rather than expenditure that has to be cut by reforms and austerity measures.

As we all know by now, a country’s economy is only as healthy as its population contributing to it. Suppose that Member States start to invest in all building blocks of the health system, a direct effect will be a healthier population resulting in an increased and meaningful contribution to the economy.

Let me come back to the stress tests. We are convinced that to maximise the full potential of a stress test in the health sector, it needs to be designed and implemented in cooperation with independent key players from the health systems. I should not compromise the autonomy of the Member States and national social partners regarding Art. 154 and 168 (7) of the Treaty of the Functioning of the European Union.

To audit the stress test as laid out by the European Commission, we are looking forward to receiving more information concerning their transparency and planning to involve healthcare stakeholders and social partners.

Turning now to the report of rapporteur Vardakastanis: Please allow me to elaborate on three elements that we consider important to highlight in this discussion:

Link to the full speech

In this January Newsletter edition, you find a collection of challenges and lessons learnt in light of the COVID-19 outbreak by hospital and healthcare employers  well as a call for political support from European institutions to strengthen capacity building of sectoral social partners to be represented in the European sectoral social dialogue in the light of the recent publication of the Eurofound representativeness study for the Hospital Sector.

This newsletter also includes news from our Members in the U.K. and in the Netherlands, EU news, events and publications relevant for hospital employers.

Following the publication of the Expert Panel’s opinion on Effective Ways of Investing in Health on the organisation of resilient health and social care following the COVID-19 pandemic, HOSPEEM drafted a summary focusing on the health workforce.

The opinion identifies the building blocks of resilient health and social care, explores the elements and conditions for capacity building to strengthen health system resilience, addresses healthcare needs of vulnerable patients at times of crisis, and defines a blueprint for health systems’ resilience testing.

Input for new initiatives at EU, national, regional or local level in the frame of the Action Plan on the European Pillar of Social Rights

The European Hospital and Healthcare Employers’ Association (HOSPEEM) welcomes the opportunity to provide input to the envisioned Action Plan on the European Pillar of Social Rights, in particular on Principle 8, which encourages the EU Member States to support the increased capacity of social partners to promote social dialogue.

Since HOSPEEM’s recognition as European sectoral social partner in 2006, we have been active in capacity building of national employers’ organisation in forms of EU-funded projects, focusing among others on East Central and Southern Europe, including accession countries [1],[2],[3] and by participating in the Eurofound research study on capacity building for effective social dialogue in the European Union. Besides HOSPEEM’s recruitment efforts, we met with former European Commissioner Marianne Thyssen’s cabinet staff, raising awareness and inquiring support from the European institutions. Likewise, we have sent meeting requests to various Permanent Representations to the EU to discuss this very topic.

As the recently published Eurofound representativeness study for the human health sector revealed, there are nine EU Member States[4] where employer organisations exist and active in collective bargaining but are not affiliated to HOSPEEM. As a direct consequence, those organisations and countries do not have the opportunity to represent their national interest and contribute to the agenda-setting and decision-making in the frame of the European Sectoral Social Dialogue Committees. Additionally, their voices are not being heard when, for example, European sectoral social partners close framework agreements which can be transposed in binding legislation across the EU (cf. Council Directive 2010/32/EU). The study also noted that there are seven EU Member States[5] where “there is no sectoral employer organisation”.

Whereas HOSPEEM sees Eurofound’s findings as an excellent opportunity to increase its membership and hence its representation at European level, we also believe that European institutions and Members States miss the opportunity to draw on the full potential of EU legislation, such as TFEU Art. 154, further strengthening the delivery of a strong social Europe for just transitions.

We are aware that the existence of autonomous employer organisations, with the mandate to negotiate collective bargaining at the national level, is still limited in various EU Member States among others due to historical and organisational national structures. We, therefore, welcome the European Commission Communication on the 2020 European Semester: Country-specific recommendations highlighting that “a well-functioning social dialogue is key to ensure that measures taken are successful, inclusive and sustainable” and that “in some Member States there is clearly room for a better functioning social dialogue”.

To echo the quadripartite statement on the Relaunch of Social Dialogue[6], HOSPEEM would like to stress that trust, formal and timely consultation with the social partners as well as support through robust EU-funding is a pre-requisite for a well-functioning social dialogue. Furthermore, the independence of social dialogue and social partners from the national government and political influence is essential, to fully representing the interest of workers and employers alike.

We, therefore, call upon the European Commission, in collaboration with EU Member States and consultation with European social partners to develop coherent structures and implement robust mechanisms as well as initiatives for:

[1] HOSPEEM (2008) HOSPEEM-EPSU Project on Strengthening social dialogue in the hospital sector in the new Member States and candidate countries https://hospeem.org/activities/projects/strengthening-social-dialogue-in-the-hospital-sector-in-the-new-member-states-and-candidate-countries/

[2] HOSPEEM (2011) HOSPEEM-EPSU Project on Strengthening social dialogue in the hospital sector in the Baltic countries https://hospeem.org/activities/projects/strengthening-social-dialogue-in-the-hospital-sector-in-the-baltic-countries/

In this July 2020 edition, you will find the Joint Statement on the 10th anniversary of the Multi-sectoral guidelines to tackle third-party violence and harassment related to work as well as the latest COVID-19 related news. This newsletter includes also other relevant news,  Member’s news, EU news, events and publications for hospital employers.

In this April 2020 edition, you will find the HOSPEEM statement on the COVID-19 outbreak and on the CEEP launch of the EU platform “SGIs facing COVID-19” as well as information on the latest HOSPEEM General Assembly, and HOSPEEM-EPSU Social Dialogue meeting and project.

The year 2019 at a glance: HOSPEEM Activity report 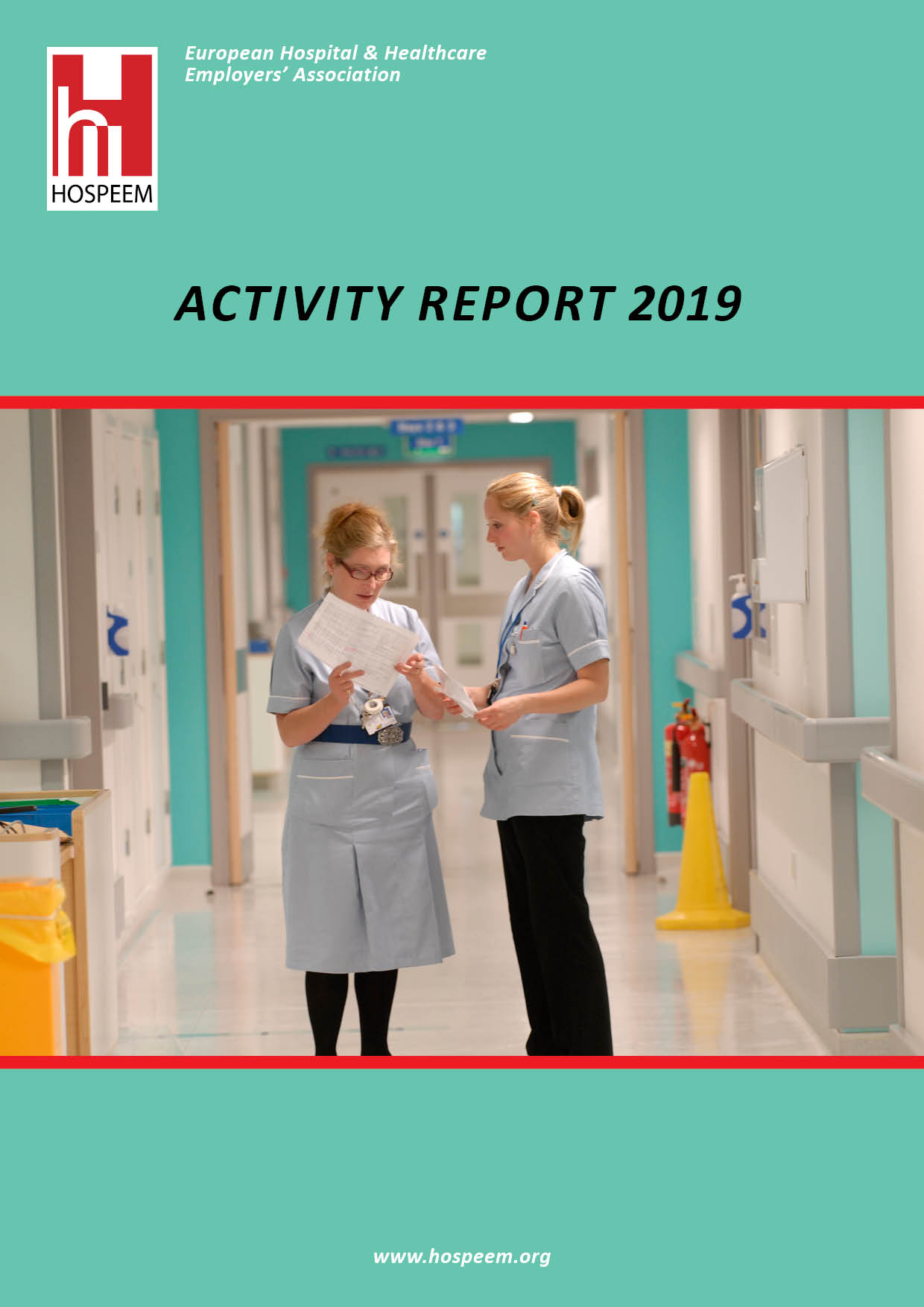 The HOSPEEM Activity Report 2019 is published. This activity report presents key information on HOSPEEM and the main activities carried out during the year.

2019 has been a year rich in achievements for HOSPEEM ensuring that the views of hospital and healthcare employers are being heard at the highest level.

Firstly, the HOSPEEM-EPSU project on “Strengthening Social Dialogue in the hospital sector in the East, South and Central Europe” has successfully started with regional workshops taking place in Bucharest in June 2019 and in Rome in November 2019.

Secondly, several HOSPEEM experts and representatives shared their knowledge across Europe joining their efforts to actively represent members’ views in the European arena.